We are a state-of-the-art company that guarantees reliability, quality and research into innovative technical solutions

A group of state-of-the-art companies working in the sheet metal cold forming, die casting, plastic processing and heat treatment sectors, controlled by a holding whose shareholders are all engaged in various roles within the operating companies. Here is a quick overview of the group: a constellation of integrated companies, according to a company engineering model that is just waiting to be told. “The idea of the group”, explain Giuseppe Maggioni and Valeriano Limonta, “came when the directors of Stame, a company making dies for sheet metal forming, decided to involve some of its employees, good, experienced and reliable technicians, who could certainly take on the responsibility of owning company shares. The proposal was made to them. They accepted, and so the initial team of Nuova Stame was formed, from which the group developed.

The same procedure was then used to involve the most capable employees in share ownership of companies. Little by little other companies in the sectors of manufacturing moulds for plastic, moulding and painting plastics, heat treatments for material processing, and engineering services, relying on company branches in Spain, Hungary and Romania, with a potential future joint venture in South Africa. Later, with the aim of protecting the performance and decision-making agility of the companies, and with the support of Pietro Galbusera, our ‘historical’ accountant, we created today’s structure: a holding company – sole shareholder of the various companies – in which all of the operational directors have shares.

Today there are 59 shareholders in the holding, which controls 16 companies, most of which are active in the province of Lecco, three are in central Italy, and others are in Romania, Bulgaria and Germany, with a total of 692 employees and a turnover that reached 291 million Euro in 2011, with a profitability of 3%. So far, this involvement has had the desired effect. The companies of the group are distinguished not only by their innovative technical solutions and the quality guaranteed by strict final product checks, in accordance with the European standards, but also by their flexibility, promptness and reliability in customer relations, with constant support from design to after-sales assistance.

“With the customer”, explains Limonta, “we always establish a relationship of credibility, trust, professionalism, seasoned with familiarity and cordiality: this can also be considered our trademark.” 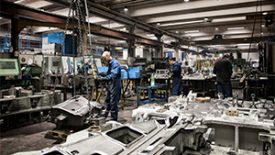